Clean up Siebel File System is one of major server maintenance activities. Over the time, Siebel file system becomes loaded with lots of invalid and orphan files. If you don’t clean up such files, it may impact on performance of Siebel application and also block hard disk space unnecessarily. To clean up such invalid and orphan files, Oracle provides an utility ‘Sfscleanup’. Here we will discus how to use sfscleanup utility to clean up Siebel file system.

But why files become invalid and orphan? 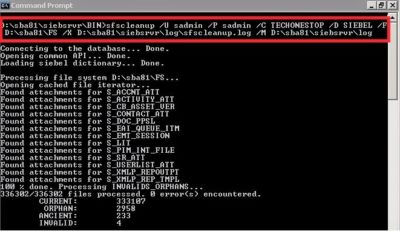 If you want to know more about Sfscleanup parameters, refer Cleaning Up the Siebel File System provided by Oracle.

Output file, generated by /X parameter, looks like below. It has three parameters – file name, file type and file operation.

This column lists the type of each file that was processed. Below we have listed down all file types and associated operations that this utility performs to clean up Siebel file system.

This column lists the type of operation performed on each file.

Except Sfscleanup, there are another two important utilities ‘Sfspartition‘ and ‘Sfsutl‘ for Siebel file system. We will discuss these in our next article.